Salamun Ala Muhammad did not or cannot give any provision of his own outside the Qur’an. 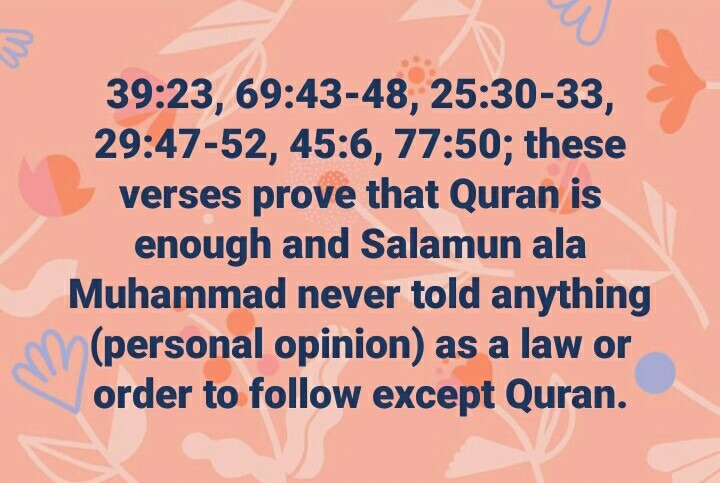 Salamun Ala Muhammad did not or cannot give any provision of his own outside the Qur’an.

Salamu Alaa Muhammad Allah sent ohii walked, and his work was inspired by the people to be vigilant /
to The Messenger of Allaah (peace and the blessings of Allaah be-upon-him) followed only the revelation sent by Allaah, and his job was to warn people with this revelation:

(50) Say, “I do not tell you that I have the depositories [containing the provision] of Allah or that I know the unseen, nor do I tell you that I am an angel. I only follow what is revealed to me. ” Say, “Is the blind equivalent to the seeing? Then will you not give thought? ”

(203) And when you, [O Muhammad], do not bring them a sign, they say, “Why have you not contrived it?” Say, “I only follow what is revealed to me from my Lord. This [Qur’an] is enlightenment from your Lord and guidance and mercy for a people who believe. ”

(203) And when you do not bring to them a communion, they say: Why do you not forge it? Say: I follow only that which is revealed to me from my Lord. This is a clear proof from your Lord. And it is a guidance and a mercy for a people who believe.

(15) And when Our verses are recited to them as clear evidences, those who do not expect the meeting with Us say, “Bring us a Qur’an other than this or change it.” Say, [O Muhammad], “It is not for me to change it on my own accord. I only follow what is revealed to me. Indeed I fear, if I should disobey my Lord, the punishment of a tremendous Day. ”

(15) And when Our verses are made clear to them, those who do not expect to meet Me say: Bring a Quran other than this. Or change it ‘. Say, ‘I have no right to change it on my own. I only follow the revelation revealed to me. Surely if I disobey my Lord I fear the chastisement of a grievous day.

(109) And follow what is revealed to you, [O Muhammad], and be patient until Allah will judge. And He is the best of judges.

(109) And follow what is revealed to you, and be patient until Allah judges. And He is the best of judges.

(12) Then would you possibly leave [out] some of what is revealed to you, or is your breast constrained by it because they say, “Why has there not been sent down to him a treasure or come with him an angel?” But you are only a warner. And Allah is Disposer of all things.

(12) Then perhaps you will give up some of the revelations that have been revealed to you, and your breasts will be constricted because they say: Why has not a treasure been sent down to him, or an angel with him? You are only a warner, and God is in charge of all things.

(2) And follow that which is revealed to you from your Lord. Indeed Allah is ever, with what you do, Acquainted.

(2) And follow what is revealed to you from your Lord. GOD is fully Cognizant of everything you do.

(70) It has not been revealed to me except that I am a clear warner. ”

(6) Say, O [Muhammad], “I am only a man like you to whom it has been revealed that your god is but one God; so take a straight course to Him and seek His forgiveness. ” And woe to those who associate others with Allah –

(6) Say, ‘I am only a human being like you. It is revealed to me that your god is only one god. So be steadfast in His way, and ask forgiveness of Him. ‘ And destruction for the polytheists,

(9) Say, “I am not something original among the messengers, nor do I know what will be done with me or with you. I only follow that which is revealed to me, and I am not but a clear warner. ”

(9) Say: I am not a new messenger. And I don’t know what will happen to you and me. I only follow what is revealed to me. And I am only a clear warner. ‘
[7:05 AM, 9/5/2021] Mahtab Ahmad WhatsApp Group: According to the verses of the Qur’an, the knowledge of the Resurrection is with Allah alone. The Prophets did not know about this far from any human being. However, it is being continued in the name of Salamun Ala Muhammad by making innumerable hadiths about the Resurrection. The conspirators following Satan are leading the people of the world away from the Qur’an of Allah and leading them to hell by fabricating myths about the signs of Resurrection i.e. Imam Mahdi, arrival of Dajjal etc. They are the ones who are waging war in the name of jihad all over the world to fight under the leadership of Imam Mahdi.

Ask him out well if he is no longer absorbed in the connection.

People ask you concerning the Hour. Say, ”Knowledge of it is only with Allah. And what may make you perceive? A

If he believes in anything other than the Qur’an, he is a disbeliever and a polytheist

Good deeds from the Quran

Good deeds from the Quran